When Alor Star (AS) hosted its 33rd Anniversary in December, 2010, the justification on why it should be held at Danok is as follows:

“Why hold a hash run at Danok?”  “Why not?” is my answer.  Danok is one of 4 border crossings between Malaysia and Thailand, the other being  Padang Besar, Betong and Golok.  Danok, one could say is a miniature of Pattaya, renowned amongst sex-tourists as the raunchiest city in the World, beating near competitor Angeles City in the Philippines.  Danok has duty free beers, great cheap food and numerous nightclubs, “manned” by unmentionables from as far as Cambodia and China.  Mandarin is commonly spoken, which goes well with the Chinamen Hashers of Malaysia.  Add on the anything-goes attitude of the Thai authorities, does one need more justification?”

Previously, AS had also hosted NQ4 (2003) and NQ8 (2007) at Danok.  NQ4 was unique in that the run was in Malaysia and the on-on was in Thailand.  Registration was in Danok, the run at Wang Tepus (near Alor Star) and the on-on in Danok again!  This could only be achieved if the event is held close to the border, and there is some clout to minimise immigration formalities for the double border crossings within one day.  AS has both these qualities.

For NQ8 and the current NQ12, all activities were held in Danok.  This cuts down a lot of inconvenience and saves time.  The only disadvantage is that Wang Tepus has great and varied hashing terrain.  Danok’s rubber plantations and orchards are not too bad and acceptable.  The only major snag in terms of setting the run, is that the main highway has to be crossed and re-crossed and at times entails prolonged running on the side of the highway to get home as happened during the run of NQ12.

Registration was in progress at lunch time on Saturday, 22nd of October, 2011, at the KPK Garden.  The arrivals were greeted by GM Sabun and a few AS Hash turds. Cold beers enhanced the warm welcome and renewed fellowships developed over many common “hashpennings.”  So called “light” meals were available, but could easily sustain nutritional needs until after the run, later in the evening.

Participants are estimated to be in the region of 150 to 200, including almost 30 from the Animales.  (The Animales northern “ambassador,” Tiger Lee should get the figures correct to feed the archives.)

The run was to start at 1600 hrs.  Several minutes before that, the old “Cow” (Kow Chin Fa) of AS was already making love to the mic, enticing participants to gather for mug shots.  “Front runners will take less than an hour to complete the run and the back walkers will take about an hour 45 minutes,” announced MC “Cow”.  About 10 minutes later, the run was flagged off.

The runners had to cross the main highway, past the frontage shops and along a lane between mostly residential houses.  A 15 minutes’ walk brought us to the edge of rubber.  Dr “Tits” Ooi, who was hobbling with your Scribe, mentioned that it was going to be a 9 km run.  “Too long,” was my reply.  On hearing this, “Ah-Pau,” a senior hasher of AS, who was nearby offered, “Follow me, I know how to short-cut.”  Believing him, several of us, including Tun See, Tiger, Puduku and Tits followed suit.  Paper generally fringed the tar road to the lake, and was read to be in an anti-clockwise direction.

About 30 minutes into the “run”, Ah-Pau took us off paper to the left, along the high-tension power cables and up and down a mole-hill.  Downhill a motorbike-capable track was followed to the left, leading to a few huts with their residents grinning at us.  The direction was to the west, meaning that we could confidently go towards home.  Then we went out of the rubbers and entered a thick secondary jungle, with a track that was slowly getting overgrown, indicating that it had not been traversed on recently.  “Cannot, cannot,” shouted those in front, as the track disappeared into the bushes.  Then the leaders went in the opposite direction and went seemingly in a circle.  Wisely, we backtracked into rubbers again and followed a better used track, that went northwards, paralleling the highway.  A few minutes later, paper was found coming from the right and leading to left.  It was almost a 2 km walk that took us to the highway and a one km walk along it that brought us to the on on at KPK Hotel.

We reached home in about an hour 45 minutes.  Tits agreed that had we followed paper all the way, we would have completed in the same time and with less anxiety.  Tun See a few hundred metres ahead complained of overstressed tights muscle the next morning.  FROPs completed the run in about an hour.

Before I could satisfy my thirst with cold beers, the “Cow” was already calling the circle to order.  Sardine Singh of AS, seated beside me commented, “When Cow gets the mic, he has difficulty putting in down.”  Acoustics was terrible and the MC could hardly be understood.

The guest GMs were given honour to execute icings.  Animales GM Menses saw the futility of using the mic, and did it on the “Box” (actually a chair) and took audience.  Those used to circles and the English-speakers appreciated the circle.  But non-English-speaking hashers did not and a few were chatting away loudly in their dialects.

Your Scribe was honoured by Sabun with a past-GM t-shirt (GM 1986).  GM Fred of Kampar Jaya also gave honour-icing for my efforts in researching the hastory of the Northern Triangular/Quadrangular.   Ipoh was represented by its senior JM.

The Animales were given opportunity to do the “Animale Haka”, followed by the “NQ Haka”, as follows:

Batang Nash Hash Joint OC, Hardwhore was given opportunity to promote the coming event.  The unanimous show of hands, encouraged the OC.  Sabun promised at least 35 registration!   With circle formalities ended, food became free for all.  The crowd slowly, but surely dissipated.  But the diehards gathered and with Past Animale GM, Wank-Wank in the lead, the hash choir went into action.  Your Scribe accompanied Peter “Guitar” Tan of AS to meet his unmentionable and thus missed out the main singing session.  On returning at about 2200 hrs, I managed to join in the tail end of this session.

As the time passed 2300 hrs, Scribe called it a day.  Sabun, KK and Tits and the AS boys were still around hosting and those desiring cold beers were not denied.  I do not know when the party ended.  As my head hit the pillow, the loud disco music penetrating the walls of my bedroom reminded me that life was just beginning in this raunchy town that was built for one purpose, sexatainment.  Needless to say, the hundred-odd NQ Hashers partying around, continued contributing to the economic growth of Danok.

Before 0800 hr on Sunday morning, Danok was quiet and slowly coming to life, a great contrast to flashing neon lights and booming music from discos and bars of the previous night.  Hashers, slowly shedding their hangovers, crawled into the hotel dining room, greeted with half closed eyes, and indulged in hefty breakfasts.

At 0900 hr, the Animales bade farewell to the hosts and was shuttled to the Thai Immigration.   Many thanks to AS for another great hash weekend! 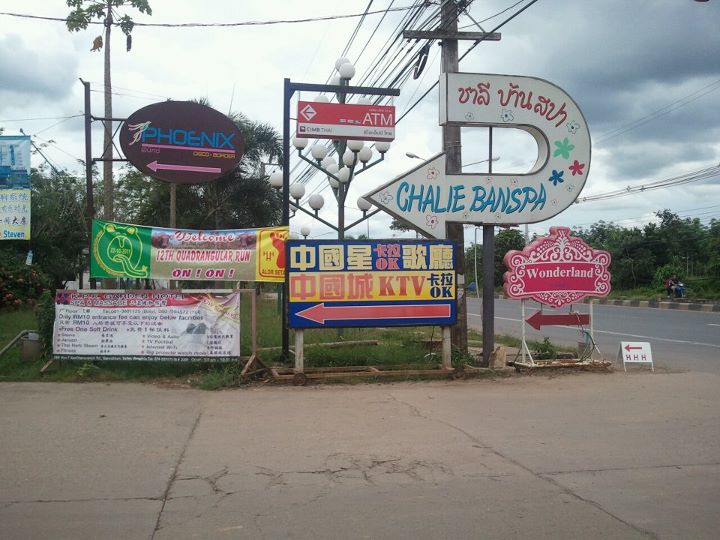 see you all next run, drink with U next meet, chat together next Do. 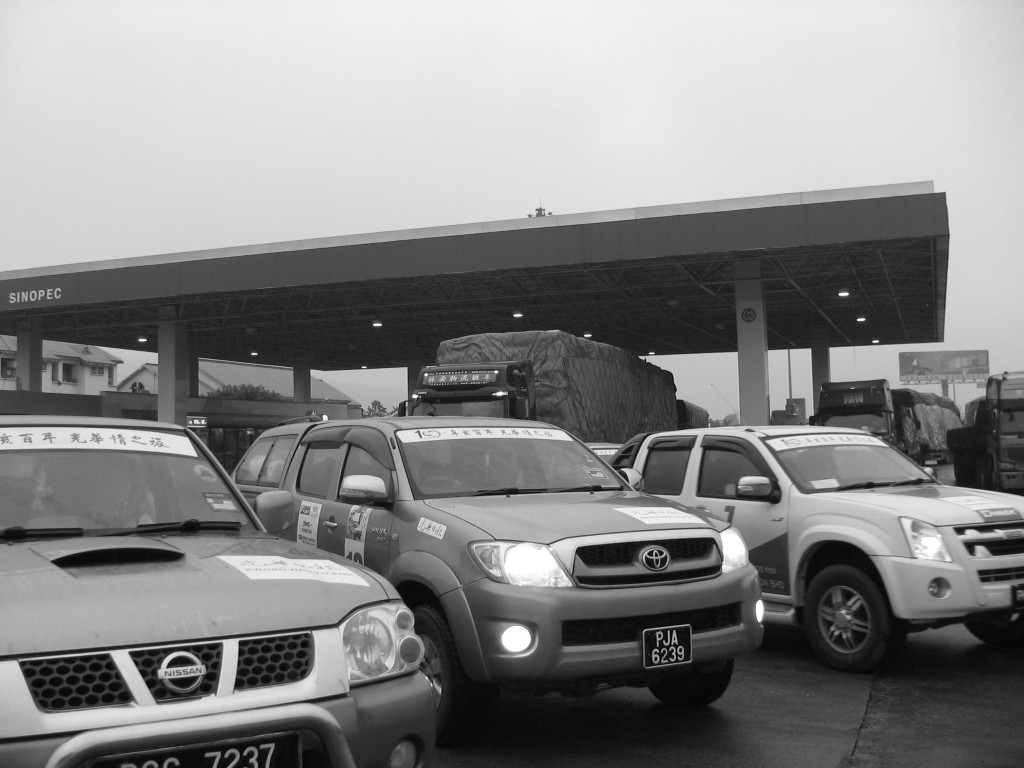 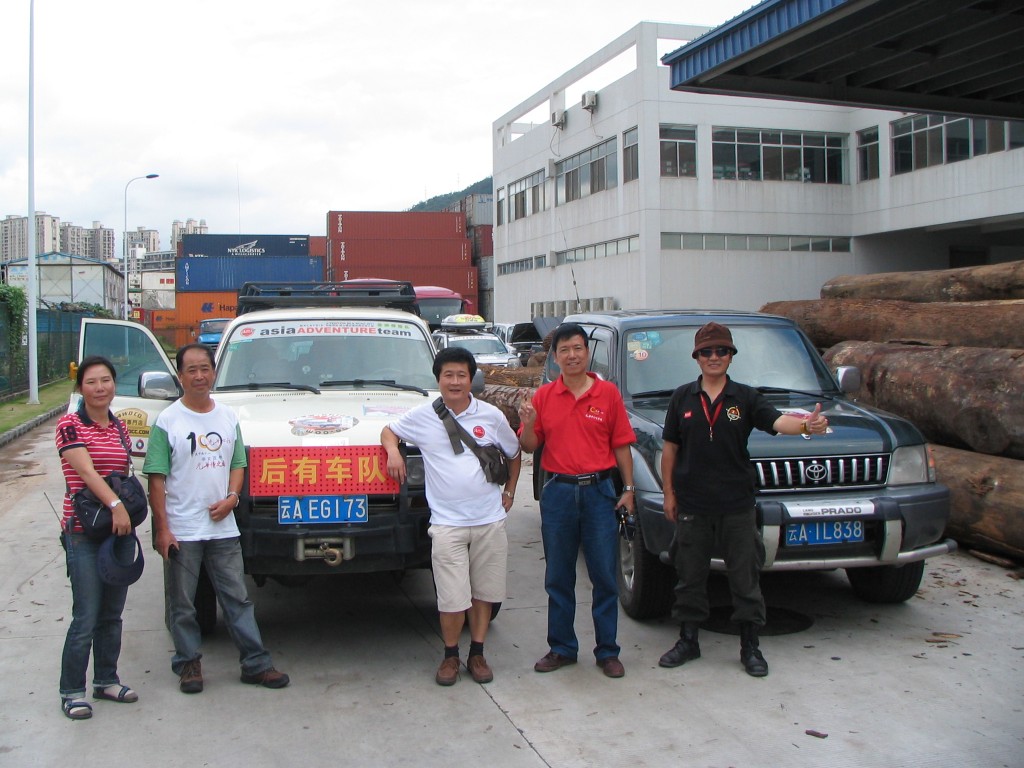